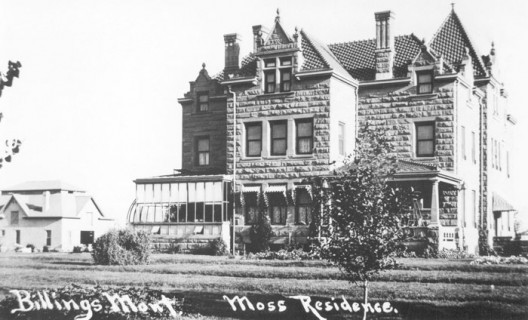 Designed by New York architect Henry Janeway Hardenbergh, designer of the original Waldorf Astoria and Plaza Hotels, the mansion showcases inspired architecture, unrivaled craftsmanship and exquisite décor. The mansion is listed on the National Register of Historic Places and has graced the silver screen on several occasions as the perfect site for period films such as Son of the Morning Star and Return to Lonesome Dove.

Melville Moss, the middle of five siblings, resided in the home until the mid-80’s and the house and its original fixtures remain intact. Modern day visitors marvel at the home’s amenities including heated indoor plumbing on each floor, an electric bell system for the servants, and an early rotary telephone among other impressive feats of technology for the period. The home represents early Billings development and culture but also interprets the inner workings of the family through various letters and other documents preserved in Moss Mansion Museum archives.

TOUR RATES CHANGE DURING CHRISTMAS SEASON: SELF-GUIDED $15, GUIDED $20. See the calendar for the specific date you plan to visit. Tour dates are subject to change on short notice. Check our calendar for specific details and current information. Please watch our Calendar for block-out dates, holiday closings, and evening tour times and dates.

Self-Paced Tours without a reservation

Guided Tours without a reservation
Monday – Saturday:  10 am and 1 pm

Reviewed by LaurenDrew1999
Jul 17, 2020
Best Part of Exploring Billings During My Summer Internship!!!
My friends from work and I are living in Billings this summer during our internship and we decided to try the Moss Mansion Clue Game. We have been checking out different places and fun things to do; this was by far the best part of the summer! Whoever is the mastermind behind doing a real life version of the game Clue in a historic mansion deserves so much good vibes. All of the women running the event tonight were extremely nice and welcoming. They did an excellent job of explaining the game and of course making accommodations to ensure safety with the current pandemic. I highly recommend visiting the mansion for a tour, or a special event, etc. It is worth every penny spent! 10/10 fantastic, It was just so much fun, my friends and I could not stop talking about it afterwards!!!